For many photographers, the experience of travel is all about visually defining a sense of place.  We journey to the ends of the earth in search of the visibly stunning, make our photographs to tell the tales of our experience, and come home.  With some processing in Lightroom or Photoshop, the images and the journey are complete.  The vision defined.

For artist Nelson Ruger, photographs are only the beginning of the process.

After an illustrious career as a Lighting and Scenic Designer in the theatre world (he designed on Broadway when he was just twenty-five years old), Ruger shifted his focus from the grand scale of the theater proscenium to paper and canvas.  Utilizing techniques he learned from painter Kim Weiland, he began to create fantastical images of far-off places with his paintbrush.  While his medium ranges from watercolor to acrylic, and his subjects vary from winter woods to majestic surf scenes, he consistently looks to photographs to inspire and inform each piece. I tend to use photography as a baseline, sometimes using it to help me with composition and other times to give me a lean toward light and color.  I start by strictly adhering to a photo as best I can while still staying fast and loose with shape, and as my work progresses, I spend less and less time with the photo and just return to it for atmosphere and flavor.

From an inspiration image to finished painting, Ruger captures the atmosphere of a place and filters out the clutter.

Some of Ruger’s earliest work was inspired by Hawaiian scenes found in a Time Life Book given to him as a child by his Grandfather.  Through those photographs, he explored visions of a wild Hawaii before the time of industry or tourism.  One photo-spread, in particular, influenced an early painting, “Pop’s Tropics”, with its reds and golds found only in Hawaii.  Over the years, he painted many types of landscapes, but would continually return to sun-washed images of surf and sky.  It became a goal for the artist to visit the place that had already inspired him so much. 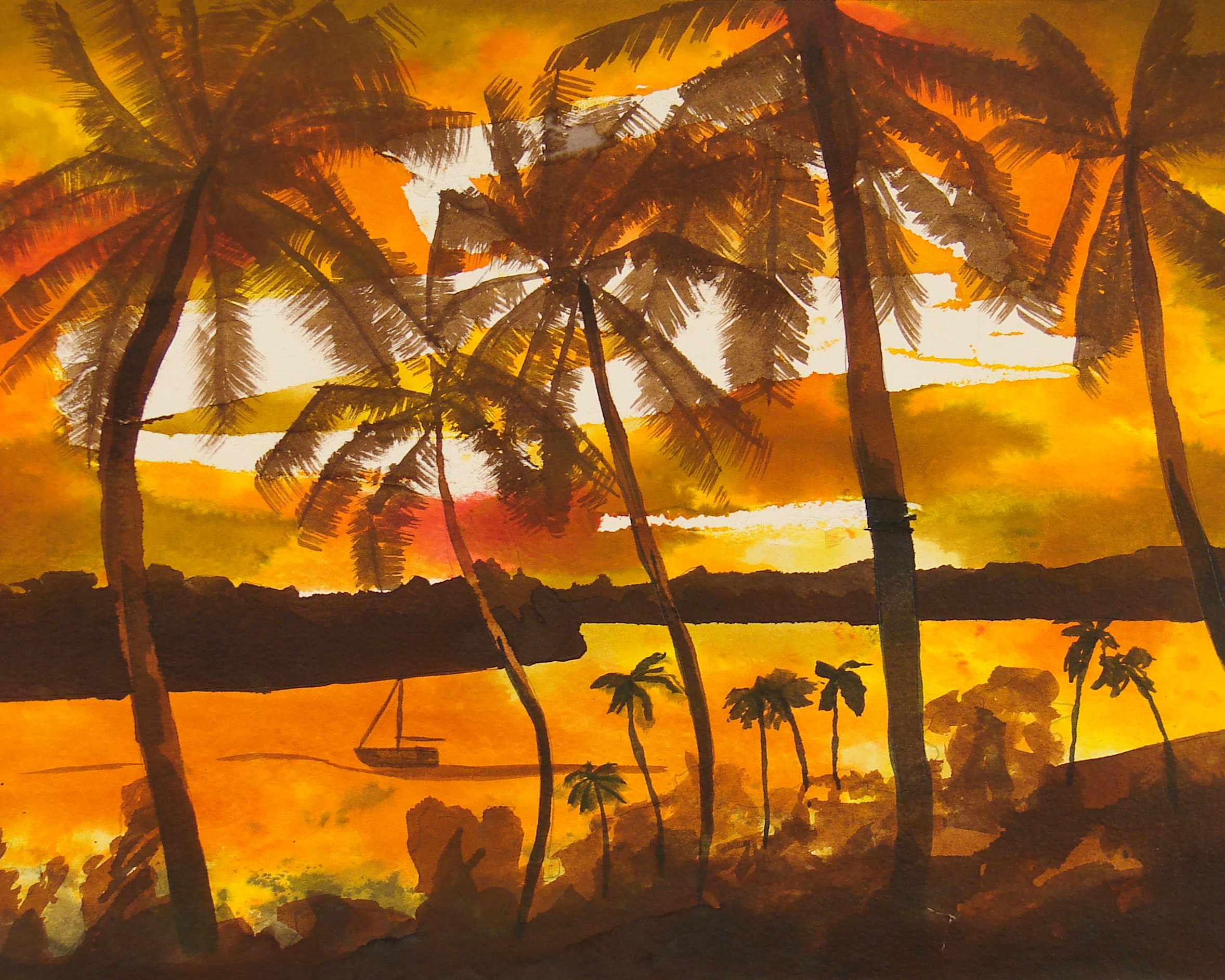 It wasn’t until about five years ago when I set food on Oahu that I realized that all the surf art I’d been creating with titanic waves, towering palms, and stunning mountains were really just uninformed visions of Hawaii.  Since then, I try to make it back as often as I can just to infuse my soul with the spirit of aloha.  It’s amazing how upon a return from Hawaii my work is more vibrant and has more movement than when I left.

In crafting his iconic and detailed images of waves and water, Nelson Ruger looks to three photographers in particular for inspiration: Clark Little, Morgan Maassen, and Tim Mckenna.  Little’s work appeals to him for the way it captures the movement of water, he appreciates Maassen’s photographs for their overall visual aesthetic, and he values Mckenna’s images for the way they incorporate the human element.  Through the study and integration of those vital aspects, Ruger has become a master at bringing a fantastical realism of gesture and detail to every painting. “Big Blue”, one of Ruger’s most prolific pieces, is modeled on the infamous Tahitian wave, Teahupoo

While conceptualizing a piece, Ruger utilizes an ‘artistic morgue’ — a habit of visual research from his theatre days — collecting images that contain subjects, forms, colors, and moods that he will infuse into the finished piece.  Sometimes he’ll assemble his favorite elements from multiple photographs into a Photoshop Collage as the final step before painting. Other times, just by compiling a morgue he’ll have enough inspiration to paint without referencing the photographs again. Despite extensive preparation and research, painting is a messy, hands-on, organic process for Ruger.

You have to have enormous trust in the process and in yourself that you will find the vision you want as you create.  I tend to build pieces in large stages, and try to keep things within a strong framework.  I make a huge mess.  I like it when my work feels like it breaks lines and has a systematic obliteration of frame in favor of exploding color and light. For Ruger, the goal of his art is to inspire others to explore the incredible landscapes available to them. In that same spirit, El Yucateco commissioned a few of his original works for their “Go Native” Campaign.  Aimed at inspiring customers to go outside and enjoy the natural world, it was a philosophical goal well aligned to his own.  Ruger happily broadcasts his desire to live a life from which he doesn’t need a vacation, and hopes others can follow his lead.  From regularly visiting the beach near his home in the Los Angeles area to his camping trips in Yosemite, Ruger appreciates every opportunity to go outdoors and experience.  The artist cites travel as a primary source of artistic inspiration, telling Resource Travel,

Travel keeps my heart and soul alive.  I have a strong tendency to get locked up in my studio and forget to leave.  I find that when I travel and see things outside of my studio I always come back with 200% the energy, enthusiasm, and drive that I had before.  It also inspires me to change up my work now and then.

I love how the sky, water, atmosphere – the vibe is different everywhere in the world, and I bring back those elements into my work, infusing them and creating a new visual aesthetic and themes for me.

The more I travel, the more I see of the world, the better my work gets. The final painting for the El Yucateco “Go Native” Campaign And the better his work gets, the more he gets noticed.  Last December, Brooklyn, NY’s The Barclays Center approached Ruger out of the blue with an unusual request.  Could he create a custom surfboard for legendary vagabond and self-proclaimed pirate Jimmy Buffett in time for Buffett’s New Year’s Eve concert in NYC?  With an opportunity to create for the Island Escapist himself, a man who seemingly embodies all of Ruger’s own adventurous wanderlust convictions, the answer was obvious. Ruger was over the moon with excitement but had less than two weeks to accomplish the project; he wanted it to be perfect. He assembled his morgue of inspiration images — a couple of tiki heads, palm trees with fronds blowing in the wind, and the faithful reds, oranges, and yellows of Hawaii that have always been his favorites. He quickly set to work designing the one-of-a-kind piece.  After finalizing the design concept with the client, he projected his sketches on the blank surfboard (a trick from back in his Scenic Design days) to help scale the design to the size and contours of the surfboard.  Over the next few days, he pulled a couple of all-nighters (another trick of from his theatre days) and poured all of his energy and creativity into producing a custom masterpiece. For Nelson Ruger, working so hard for something he loves is a dream come true.  After years of helping Theatre Directors achieve their artistic visions on stage, he’s choosing to work as an independent artist and make his own dreams the priority.  He admits,

That means long, hard hours.  It means constant acts of creation and fighting a 24-hour-a-day battle with self-doubt and having to come out on top every time.  It also means living a dream.

Finally, it means he has the freedom to travel in pursuit of his next artistic inspiration, as he would say, ‘to keep his heart and soul alive’.  When asked where in the world he would travel next, Nelson Ruger, an artist forever changed by the colors of a Pacific Sunset introduced by his Grandfather, knew the answer right away.

Fiji.  Because Fiji.  The more natural the landscape and the less industry and commercialization the better.  I look forward to losing myself in another amazing, warm culture and bringing that warmth and vibrance into my work.

We look forward to it too. “To See Behind Walls” Photographic inspiration and process shots of “To See Behind Walls” Through The Lens Season 3 Begins from AdoramaTV

What’s up, after reading this amazing post i am as
well happy to share my experience here with colleagues.

I need to to thank you for this wonderful read!!
I certainly loved every bit of it. I have got you book-marked to check out new things you post…

Good article. I am dealing with many of these issues as well..