20 Photographs That Capture the Beauty of China and Its People

I have a weakness for travelling and documenting the world through my photography. My trips often start with a simple email from a friend asking if I am interested in getting on a plane and going somewhere new and unique to photograph. In the case of my recent photography trip to China, however, there was no email from a friend. This journey started with a single image from a place I had never heard of, XiaPu. That single image is what inspired me to make a trip halfway around the world.

This was to be my second visit to photograph in China. In 2012, I travelled to Guilin, an area known for the beautiful Karst mountains, Li River, and Longji rice terraces. However, due to poor weather conditions, I had never been completely happy with my images. So, I decided to try China again, resulting in a 17-day trip to both Guilin and XiaPu. This trip to China was soon to become my most challenging and photographically rewarding to date. A Chinese fisherman on the Li River splashes water with an oar while Cormorants sit on the boat. Getting a sunset like this doesn’t happen every day in this area.

While in Guilin, I was on my own with a local guide and followed the same routine every day. Each morning, I woke up around 4:00am and got myself to a landscape location for sunrise. I say “landscape”, but many of these outdoor scenes also included people. This usually meant climbing a hill or taking a boat in the dark to the location I wanted to photograph before spending the next 3 hours there capturing the changing light conditions. After returning to my home base and having breakfast, I would take a short break and focus on portraits in the afternoon. Then I would head to a sunset location for another chance at a landscape image, followed by heading back to the hotel and backing up my images. I would get about four hours of sleep before repeating the schedule the next day. After Guilin, I traveled to XiaPu to photograph abstract and painterly coastal scenes with a group of photographers I knew from a previous trip to Indonesia. All in all, I averaged 4 hours of sleep for the full 17 days and came home completely exhausted. Light beams piercing the sky as seen from the top of Cuipingshan Hill in Yangshuo, China. It is a bit of a tricky climb to get to the top, so I had the place all to myself this evening. The beams lasted for about 20 minutes and were moving from place to place.

There were many highlights of the trip, but my interactions with the Chinese people were the most meaningful memorable experiences. The rural villages of China presented great opportunities to capture portraits of character-filled people with interesting backgrounds. To find my subjects, my guide often walked right into homes, calling out to alert the homeowners we were there. This approach would not have worked well in the United States and felt uncomfortable at first, but quickly realized this was perfectly normal in China. Another highlight for me was meeting the Chinese photographers. I met many, and for those that spoke English, they were interested in comparing photography gear and just having a short conversation with a photographer from another part of the world. I am looking forward to returning to China showing people how beautiful and friendly the villages, scenery and people are when I lead future photo tours with my friend Rick Sammon. Portrait of a Chinese villager from outside Xing’Ping. He took a little convincing at first but really warmed up to the camera fast.

Also, you can subscribe to Koskela’s free monthly photography e-magazine or get information on his upcoming photo tours. Two women in silhouette on a beach outside XiaPu, China. The muddy beach appears golden as the sun lights it from the side. Chinese fisherman next to his cormorant bird. I could see the cormorant was ready to spread its wings and got a little lucky with the timing on this shot. Men holding their fishing nets during a sunrise at Bei Qi in XiaPu, China. XiaPu is famous for its mudflats that fill with water when the tide is in. A man from the Longji area takes a break outside his house. He was a natural model who had great expressions.

A fisherman takes a break on the Li River at Xingping near Guilin. This was my fourth attempt at good lighting with the cormorant fishermen. This sunrise made it all worth it. Vertical shot of a person walking in the mud flats of XiaPu, China. I saw this scene as I was heading back from shooting higher up on the hill. I had been disappointed by total cloud cover, but the conditions really worked for this shot. 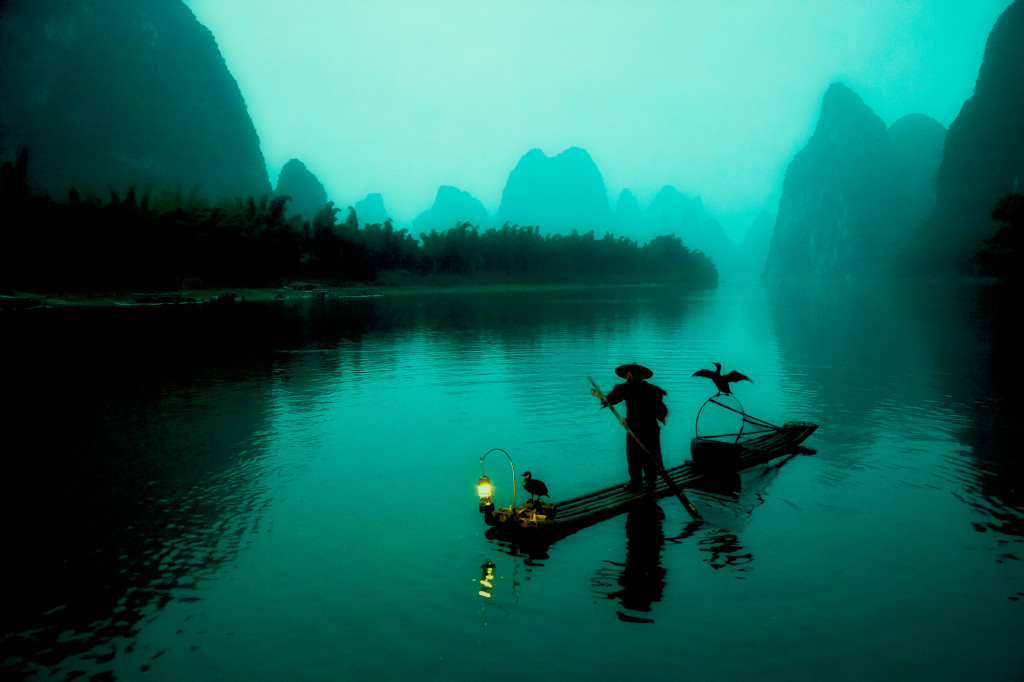 A fisherman silhouetted on the Li River in the early morning. To get to this spot, you need to take a boat up the Li River in complete darkness, which is a surreal experience. Silhouette of farmer and water buffalo on rice terraces. The rice terraces were built over many hundreds of years and are amazing to see and experience. Pink and blue colors overlooking the Li River from Xiang Gong Shan. This is definitely one of China’s best views, but also a difficult place to get good light. This picture was taken at sunrise on my 4th attempt. A woman from Xiaozhai Village near China’s Longji Rice Terraces. This image was taken within a short walk of her house. Clouds moving in over the Longji Rice Terraces shortly after sunrise. I was initially disappointed at the overcast conditions, but small patches of clouds began moving through the hills which added some interest to the image. A man using a glider on the mudflats of XiaPu, China. The bamboo sticks create a surreal, painterly scene. Two older women sitting on the stairs outside of their house. Although I took this image in 2012, I was back in 2015 and found the same women, sitting on the same stairs, and wearing the same clothes. Sunset at Viewpoint 3 in China’s rice terraces. This shot was taken when the terraces are filled with water. An older woman from a small village near XingPing sitting down outside her house. We were headed out of the village when we spotted some young people and inquired about possible portrait subjects. Her grandson was one of those people and led us to her house. He managed to convince her to have a portrait done. A lone fisherman carrying his net at Bei Qi at XiaPu, China. The golden reflection is from sunrise light that appeared in the background, just out of the picture. I was shooting a portrait across the street when I noticed this young girl watching us. It was obvious she wanted her picture taken. After getting permission from her parents, I began taking her picture. She was so happy that she laughed for most of the session, a true reflection of the people I met on my journey through China.

Film Shows Why the U.S. Virgin Islands is the Perfect Tropical Getaway

Instagrammers Are Revealing a Different Side of Life...

Ring In The New Year With These Incredible...

The cormorant fishers: I’ve heard this is no longer a viable fishery, and it’s now staged for paying photographers. Your experience?

I know you didn’t ask me but you are correct. Pollution has wiped out the fishery.

Nice images!
Can you tell us the light setup for those portraits? If it was an external flash, do you have help to hold it?
Thanks!

Hi there! I could have sworn I’ve been to your blog before but after going through many of the posts I realized it’s new to me.
Anyways, I’m certainly delighted I discovered it and I’ll be book-marking it and checking back often!

Do you know how to make your site mobile friendly? My web site looks
weird when browsing from my iphone4. I’m trying to find a
theme or plugin that might be able to resolve this problem.
If you have any recommendations, please share.
With thanks!

I just want to say I am very new to weblog and really loved this web-site. Likely I’m likely to bookmark your blog post . You absolutely come with really good articles and reviews. Thanks a bunch for sharing your web-site.

Useful info. Fortunate me I discovered your website unintentionally, and I am stunned why this twist of fate didn’t took place in advance! I bookmarked it.

I do not even know how I ended up here, but I thought this post was great. I don’t know who you are but certainly you are going to a famous blogger if you are not already ;) Cheers!