Incredible Environmental Portraits Show A Unique And Beautiful Side Of Iceland

Western Australia-based photographer Benjamin Hardman has not always had a love for Iceland. In fact, Iceland wasn’t even on the young photographer’s bucket list. When a local friend returned from the Nordic country, he told Hardman of the beauty that made up the diverse landscapes, the Northern Lights he had witnessed, and the endless adventures that are ingrained with an Icelandic road trip. Hardman did a Google search and was blown away by the image results.

It was at that point I knew I had to visit, so I booked my first trip. It’s crazy to think how little I knew about the country when I first decided to go. I spent the time before the trip researching locations, routes, best times to photograph, weather patterns. But even as I landed in Keflavik for the first time, I still felt like I had no idea what Iceland had in store for me. This first trip to Iceland impacted my life in so many ways. Everything changed for me from that point.

But after Hardman’s second solo trip to the island nation northeast of the United Kingdom in late 2013, he felt that something could be added to the photography equation.

During that trip, I photographed the landscape non-stop for 15 days. I seriously couldn’t get enough, even despite the intense winter storms. I was addicted to this incredible region. However, after coming home from this trip and spending some time editing the images, it became apparent that some were lacking a human element. It was difficult to show a sense of scale of Iceland’s expansive and epic locations. I knew at that moment, I wanted to add the human element. You can’t really gain any sense of scale or the same drama from the landscapes on their own.

Hardman suggested that his girlfriend Amy should join him on his next excursion to Iceland. She happily agreed and decided to bring one of her favorite dresses, a beautiful pink retro style, given to her by photographer Alison Scarpulla. Once they started exploring the Icelandic coastline that summer, they knew they were creating something unique.

We never intended on building a complete series using the dress, but once we began adding Amy and this beautiful dress into the incredible landscapes of Iceland, it became evident that a series was forming.

LONE was born. A series of 9 environmental portraits that portray the pilgrimage of a lone wanderer venturing into a fierce, majestic, and incomprehensible landscape. Amy and I were aiming to accentuate the isolated feeling that one might experience when alone in nature. Having a brave model really helped to achieve unique images, as Amy was able to push through the cold and harsh conditions and venture further into the crazy, yet photogenic, locations. The resulting images are not only a beautiful and unique take on one of the most photographed locations on the planet, but also helped raise awareness to the threats that tourism brings to this small and proud nation. Over one million tourists per year make the journey to photograph and experience one of the most remarkable places on the planet. These figures dwarf the 330,000 Iclenaders who call this frigid place home. Lack of adequate infrastructure and a consistent influx of tourists is leading to deteriorating conditions in this fragile land.

Hardman ordered large fine art prints from his friend Paul Jarvis of Perth Pro Lab and installed them in the KURB Gallery in downtown Perth. LONE ran from December 19, 2014 to January 2, 2015 and generated over 100,000 Icelandic Krona for the Nature Conservation Association to help keep Iceland pristine for future generations of photographers and adventure seekers. 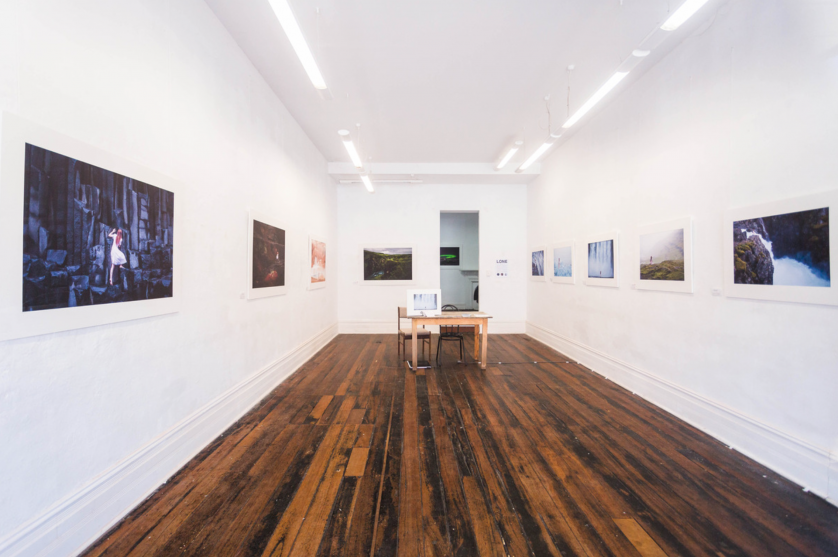 LONE on display at the KURB gallery in Perth, Western Australia

Dear Photographers: Please Don’t Get On A Plane To Nepal

See The Extreme Difference Between Summer and Winter...

There is definately a lot to know about this issue.
I love all of the points you made.

Today, I went to the beachfront with my kids. I found a sea shell and gave it
to my 4 year old daughter and said “You can hear the ocean if you put this to your ear.” She put the shell
to her ear and screamed. There was a hermit crab inside and it pinched
her ear. She never wants to go back! LoL I know this is entirely off topic but I had
to tell someone!

Howdy would you mind letting me know which web host
you’re using? I’ve loaded your blog in 3 completely different internet
browsers and I must say this blog loads a lot faster
then most. Can you recommend a good hosting provider at a reasonable price?
Cheers, I appreciate it!

Hi everybody, here every one is sharing such experience, therefore it’s fastidious to read this website, and I used to visit this weblog
everyday.

I am now not certain where you’re getting your info, but great topic.
I needs to spend a while studying much more or figuring out more.
Thank you for fantastic info I was searching for this info for my mission.

Hi! Do you know if they make any plugins to protect against hackers?
I’m kinda paranoid about losing everything I’ve worked hard
on. Any suggestions?